An L-system is a mathematical notation that allows for generating beautiful self-repeating structures from a set of symbols and rules that apply to them. Suppose we want to mathematically model a fractal, we define an L-system as a tuple

in which \(V\) is our alphabet: all possible symbols that can exist within our system. The \(\omega\) is the initial set of symbols from which we can start applying our rewrite rules: our previously mentioned axiom. Finally we have \(P\), which consists of all rules that determine how a string of symbols needs to be rewritten to form the next iteration of symbols.

The rewrite rules can be defined as

where every rule \(p_i\) is contained in \(P\), and every symbol \(v_i\) is contained in \(V\). The symbols before the arrow are called the antecedent, whereas symbols after the arrow are called the consequent. We use the \(\Vert\) sign to denote a binary operator which concatenates its left and right symbols. For instance, \(A \Vert B = AB\). The total number of symbols which are concatenated in the consequent is equal to \(N\).

In short, a rule declares that all symbols that match the antecedent must be rewritten to represent the consequent. Not all \(v_i\) need to exist as an antecedent, such symbols are constants. Symbols that are rewritten are called variables.

Let us now generate a Sierpinski arrowhead. This fractal can be generated by interpreting the iterations of the L-system

which define the instructions for a turtle graphics renderer. Turtle graphics are generated by moving a virtual paintbrush (the turtle) across a virtual canvas by interpreting a series of commands. In this instance both \(A\) and \(B\) require the turtle to move forward, whilst \(+\) and \(-\) require the turtle to rotate \(60^{\circ}\) left and right, respectively. The result can be seen below: the Sierpinski arrowhead generated for multiple iterations i. 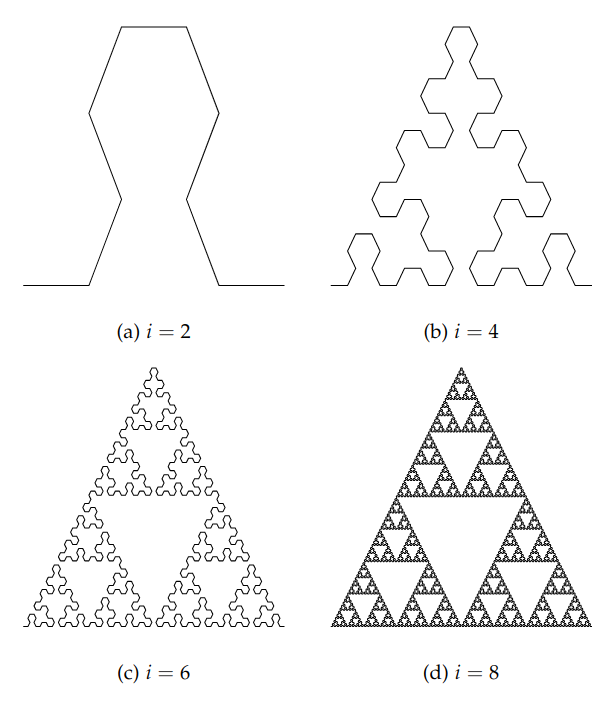 Now that we know what an L-system is and how it should be generated in theory, we can start creating an simple l-system generator in code. Our approach will be simple and sequential, which is more than adequate for most implementations of L-system generators. There are more advanced parallel solutions, which we will discuss in the future. First though, like many algorithms, it is important to learn how to solve the problem sequentially.

Let’s translate our L-system’s tuple to a simple set of structures:

I’m sorry for those who don’t like C very much (I understand why, I just tend to enjoy the clear view of memory it provides, please bear with me). You should look primarily at lines 19 to 22 in any case. We have our axiom representing \(\omega\) and our rules representing \(P\). Once we have loaded any given L-system into our structure above (using, for example bool try_load_system(LSystem * system, const char * file_path)), we can start applying the rules for \(N\) interactions.

You will notice a two things.

Let’s look at the implementation of this repeated rewrite method.

Hopefully the comments make it pretty clear what is happening: we loop over all symbols, search for an antecedent that matches the current symbol, and if so we place the consequent in the next_symbol_list. If no applicable rule is found, the current symbol must be a constant, and thus we simply copy the same symbol to the next list.

We briefly touched upon rendering a generated set of symbols, and luckily for us it’s not that difficult to implement. Our list of requirements is short:

If we implement a simple rendering library on top of, let’s say SDL2, our rendering code will thus look like:

We simply walk through the symbols and add points to a poly-line (the point_list) whenever we move the cursor forward. Once the poly-line is build we render it using our rendering library of choice.

Feel free to take these pieces of code and build your own L-system renderer! Or, if you want to have a solid piece of code to work with, take the sources to my little L-system generator I wrote for the Floppy Challenge.

As I said before, there are more advanced parallel solutions I’ll discuss. I do want to stress that the speed-up is less useful than you think, and maybe I’ll make a post about that one day. For now, let’s have a look at some other L-systems my little program rendered.

Ah, never let people say programmer-art cannot be nice (even if it is deterministically created).